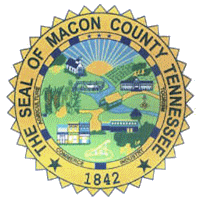 When the first explorers and settlers came into what is now Macon County they found the territory composed of a wilderness inhabited by Indians and wild animals. Very little is known of the early history; however, remains of Native American villages and burial grounds have been found. It is believed the early Indian inhabitants were from the Chickasaw, Shawnee, Cherokee and Creek tribes.

The county was organized in accordance with the General Assembly of the state of Tennessee, 18 Jan 1842, which provided that a new county should be established. Macon County, created from parts of Sumner and Smith counties, was named in honor of Nathaniel Macon (1758-1837), a Revolutionary War soldier and North Carolina statesman.

The first county court met in the house of William Dunn and appointed Brittion Holland, William Dunn, Samuel Sullivan, Eason Howell and Jefferson Short as commissioners for the purpose of selecting a suitable site for the county seat. The place selected was on the land of John B. Johnson and was named LaFayette in honor of the legendary French general, Marquis de LaFayette, a famous Revolutionary War figure who assisted the American colonies in gaining their independence. The deed, dated 26 May 1842, described the property as lying and being on the dividing ridge between the waters of Cumberland and Big Barren River and on the waters of White Oak Creek. the land, containing 20 acres more or less, was laid out including the public square, the streets and 75 lots. The county was first subdivided into seven civil districts and by 1850 had increased to 12 districts.

In 1870 a portion of Macon County was cut off the southwestern corner to aid in forming Trousdale County. Macon County is bounded north by Allen and Monroe counties, Kentucky; East by Clay and Jackson Counties; South by Smith and Trousdale Counties and West by Sumner County, TN, containing approximately 300 square miles.

In the late 1800's, Red Boiling Springs was widely known for the medicinal properties of the water that flowed down Salt Lick Creek. Several hotels were built between 1890 and 1892 with numerous mineral springs and baths that made the resorts a 1920's tourist attraction. Information from the Macon County Times in 1935 lists the following hotels in Red Boiling Springs: Counts, Donoho, Arlington, Lincoln, Moss, Palace, Knight, Farmers, Cloyd, Jordan House, Hudson House and Russell House. Present day Red Boiling Springs hotels now existing are the Armour, Donoho and the Thomas House.